I landed in Marrakech on a flight from France where I had been exploring the ancient villages of the Cote d’Azur. I found the airport to be surprisingly modern and large. The architecture, highly influenced by Moroccan style, looks like a mid-century honeycomb structure with traditional Moroccan carvings throughout. Vast, open marble-floored halls lined with ticketing and service counters around the perimeter make it easy to navigate and find your way. The shear height and size, along with immaculate whiteness, provided a striking first impression. Many travelers rank Menara airport as one of the most beautiful in the world and I would definitely agree.

Once outside the terminal, I began to feel the frenetic energy that drives Marrakech. Men with name signs and taxis lined the road to transport passengers to their hotels, Riads or homes. I have heard that taxi drivers can try to gouge unsuspecting tourists as much as $300 for relatively short 3-mile drive to the medina. A taxi only costs about 60 dirham if you go outside and walk the 100 yards to where a herd of taxis wait just off the airport. Be sure to have dirham. You can get it from ATM machines inside the airport. Ask the taxi driver to turn on the meter for an official price and get out if they refuse. I recommend checking with your hotel or Riad about transfers as most provide that option. I booked a private car in advance from the Riad for $20 US and gave the driver a few dirham tip.

My driver could only take me as far as the medina wall. I was staying in a Riad on the south side of the medina in the oldest section of the spice market. The dusty roads at the wall surrounding the medina were clogged with taxis, cars, service vehicles, donkey carts and the always present motor scooters weaving death-defyingly in and out. My driver stopped in the middle of the chaos and I was afraid that I would have to go it alone from here. In his almost perfect English, he told me to stay inside the car and he would text Laurent, the owner of the Riad to come and fetch me and my suitcase.
Not five minutes later, a Western-dressed man walked up to the car with a welcoming smile and opened the door. “Hello! Welcome to the medina,” he laughed. Next thing I knew, we were winding through tiny pathways swarming with people, jumping out of the way of the irrational, suicidal scooter drivers. We entered a vast covered area of stalls flashing vibrant colors of every sort of jewelry, pottery, hanging lamps and clothing. We finally reached the spice market where it felt refreshingly quieter. The cool calmness of the spice market held a variety of stalls displaying mounds of colorful spices. The spices were mounded up into high showy peaks and the intense odor of exotic herbs caressed my nose with unfamiliar notes. 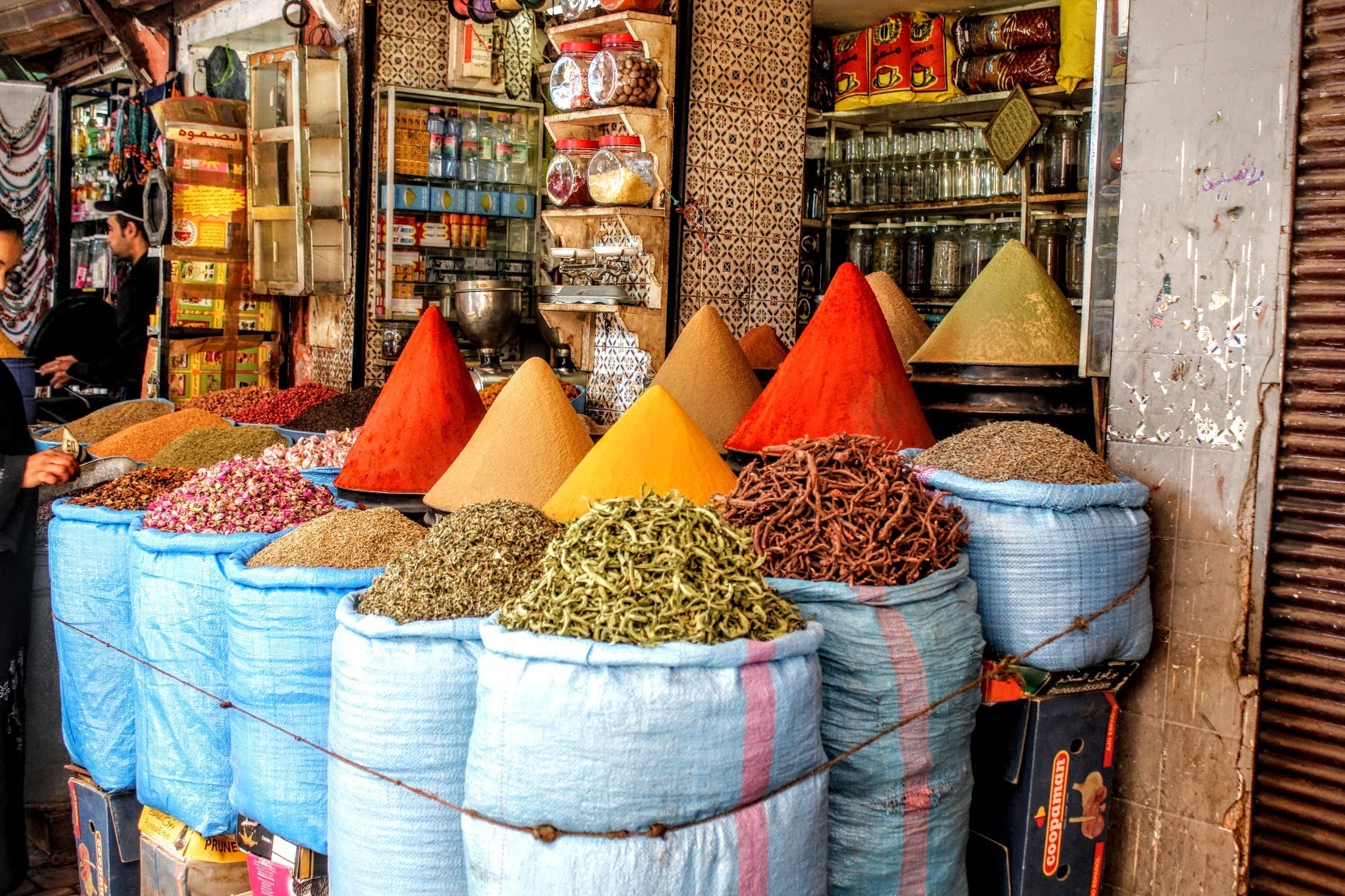 I noticed how animated and friendly the merchants seemed as they hawked their goods in a sing-song call. As we moved further and further into the labyrinth of tiny paths, the goods and stalls became more and more sparse until one man merely sat on the ground next to a few old pots. I could see how marginally many people in Marrakech subsisted. In the walls along the street, tiny hollowed out cubbies held dirty mattresses and a few belongings that served as homes. At night rolled up aluminum doors would be pulled shut to serve as a safe place to sleep. In other openings in the walls I saw a few “homes” with chairs, sometimes a TV. Most of the dark windowless rooms held piles of brilliant clothing and cloth strung across the room on cords. Every echelon of Marrakech society lived thrown together in the streets and alleyways of the medina. We turned down a mostly empty pathway and came upon a plain wood and iron door where a man stood outside. He greeted us in Arabic and opened the door revealing a lavishly painted tile floor and an equally lavish reception hall. A stained-glass chandelier hung above a painted aquamarine colored receptions desk reflecting fractals of shimmering colors from the many sky lights. The phenomenon of Riads as guest houses and inns in Marrakech has created a booming business for foreigners who have bought many decaying old crumbling former mansions and palaces for almost nothing. They have created a resurgence in artisans and craftsmen who work with dedication restoring the ruins to their former beauty and elegance.
While Riad Noos Noos exudes beauty, charm and elegance, it’s a more modest Riad compared to some in the more sought-after areas of Marrakech. I chose to be in the old spice market and former Jewish section of the Derb El Kheir quarter of the medina so my experience here would be different from the touristic madness that most people take in when visiting.

Many people visiting Marrakech get annoyed by the aggressiveness of the vendors and how everybody wants to get paid for the smallest gesture. When Westerners come to Marrakech, their “wealth” appears unimaginable to many Moroccans. They see an opportunity to make money from the throngs of people invading their town. It can be very overwhelming in a short amount of time.
Make no mistake, the exotic, chaotic whir and buzz in Marrakech can be exhausting and take stamina just getting around the medina. The rewards of the ancient charm, colorful goods, amazing food, and a mysterious wildness, make it worth the pandemonium. 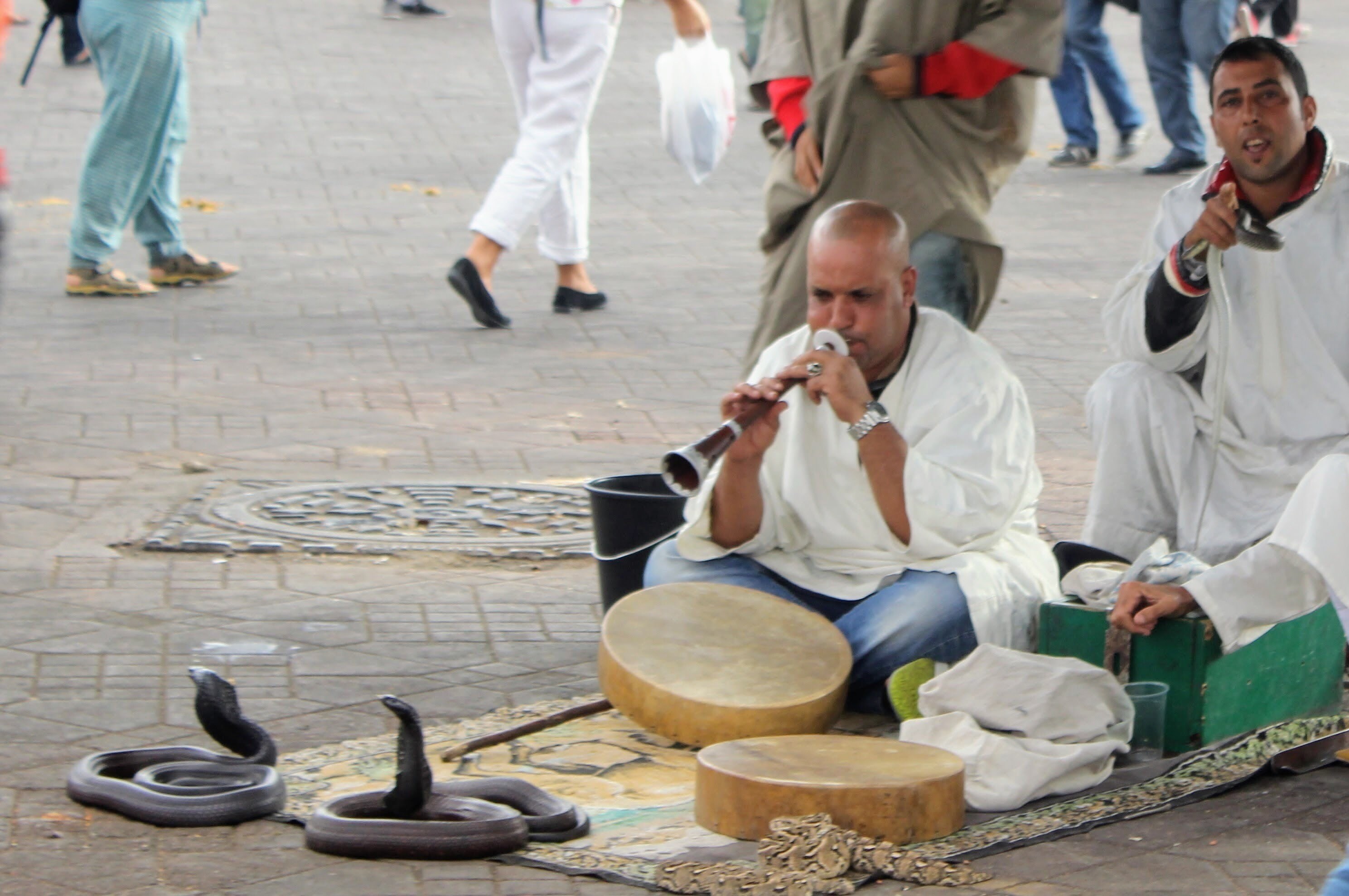 10 Things to Do When The Airline Damages Your Luggage

I just had a perfect travel day...said no one in the last few decades!